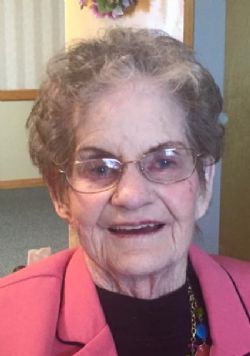 
Betty Williams, 84, entered into eternal rest on April 11, 2017. Betty Jewel Miller was born in Big Spring, Texas on June 9, 1932 to Wilburn Waldo Miller (Tom) and Katy Jewel Miller. She graduated from Jayton High School in 1950. She married Bill Williams on December 4, 1950 and the two were married for 57 years until his passing in 2007. Bill opened his service station as a very young and inexperienced businessman. He learned quickly that he needed a helpmate and partner; he found and married a ''Jewel''. Together they operated their businesses successfully on the south side of Jayton and over the years were blessed with many customers and friends. Betty kept the books and was the glue that held all the enterprises together. Betty and Bill often opened their home, hearts and table to friends and strangers alike. She was a member of the First Baptist Church of Jayton where she taught Sunday School when her children were young. She was an active member of the Eastern Star and proudly served as an officer in the Spur Chapter. She enjoyed participating in activities of the Senior Citizens of Kent County until she moved to Levelland

It's safe to say her most prized title was ''Momma.'' Her three children, Nick, Larry, and Rhonda were never without a fan in the stands in all their activities. She loved her children, and (Grand) children who lovingly called her ''Nanny'' and she enjoyed watching them grow and prosper.

She remained in Jayton until 2012, but due to her health, she moved to Levelland to be near her children. She was initially concerned she would not be among friends. However, she quickly made many there and was blessed with precious caregivers who loved and cared for her as if she were their own Mother.

She was preceded in death by her parents Tom & Jewel Miller, her husband, Bill and five brothers, Ollie, Garland, Bill, Ray & Robbie and two sisters Dixie and Nadine.

She is survived by her sons and their wives, Nick and Laurie Williams, Larry and Carla Williams of Levelland. Her daughter Rhonda and husband Rick Spann of Lubbock. Her brother T.J. Miller and his wife Nadine of Lubbock. Sisters-in Law (who always seemed like sisters) Nelda Helmers of Monahans and Dorothy Cranford of Fritch. Eight Grandchildren: Nicole, Jason, Tyson, Brian, Selena, Amy, Amanda and Jenni, Twelve Great Grandchildren and One Great-Great Grandson.

The family wishes to express their profound appreciation for the staff of Hickory Place, Interim Hospice of Levelland and the wonderful caregivers JoAnn, Patty, Lidia, Bryanna & Jassinia who cared for her during the later stages of her life.


The family will receive visitors at Krestridge Funeral Home in Levelland on Friday, April 14 from 6:00 p.m. to 8:00 p.m. and on Saturday, April 15 at the First Baptist Church in Jayton from 10:00 a.m. to 12:00 noon. Her celebration of life service will follow at First Baptist Church at 2:00 p.m. with interment at the Jayton Cemetery immediately following the service.

Arrangements are under the direction and personal care of the professionals at Krestridge Funeral Home, (806) 897-1111.

Spur Chapter of the Order of the Eastern Star
309 Burlington Ave.
Spur, TX 79370

To order memorial trees or send flowers to the family in memory of Betty Williams, please visit our flower store.