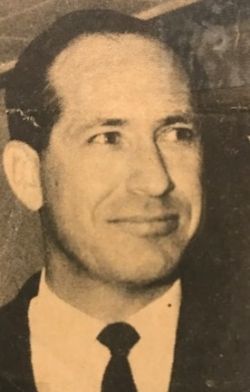 Gene Stanley was born September 21, 1929, in Shawnee, Oklahoma to J.J. Stanley and Jewel O'Keefe Stanley. He was raised in Johnson County, Texas where he attended Cleburne Public Schools. Gene served three years in the United States Air Force in the Airways and Air Communication Branch in Alaska, Washington, Florida, and Texas.

Following his military service, Gene married Fredda Burgess of Cleburne in 1952, for which they remained happily married for fifty-six years.

Gene began his career in the private sector of broadcasting, working for KHBR in Hillsboro, Texas as a technician. Later, he worked as a sales manager for KBEC in Waxahachie and KTEM in Temple. In Temple and Weatherford he became the general manager of KTEM and KZEE. Following, he moved his wife Fredda and four children to Levelland, where he became general manager and managing partner of KLVT for thirty-one years.

Both Fredda and Gene retired in 1993. In recognition of their retirement, they were honored by the City of Levelland, held at South Plains College. Levelland community involvement was an important commitment to Gene. He served as President of the Rotary Club and Chamber of Commerce, which he MC'd for several years. He received multiple community-related recognition awards though out his career. Gene attended First Baptist church for fifty seven years.

His wife, Fredda Stanley and son, Gregory Stanley preceded him in death.

He is survived by one sister, Joann Markum of Ft. Worth and one brother, Charles Stanley, of Wiley. Surviving are three daughters, Tara Thrash of Lubbock, Carrie Donart of Arlington, and Tracie Petrie of Lewisville, as well as eight grandchildren and eight great grandchildren.

Gene ''Grandaddy'' is remembered by his family as a kind-hearted and humble man, who was a devout Christian, Husband, Father and Grandfather. An avid tennis player, Gene played competitively well into his sixties. Also, he shared a love of the mountains and the outdoors, where he and his family created many special memories together through the years. Gene could often be found cheering on his Grandchildren at their many sporting events and activities or socializing with his friends at the coffee shop. Remaining ever strong in his faith, Gene is now reunited with his son Greg, and his bride Fredda.

In lieu of flowers, Gene has requested that donations be made to the Gene and Fredda Stanley scholarship foundation at South Plains College.

To order memorial trees or send flowers to the family in memory of Billy Stanley, please visit our flower store.