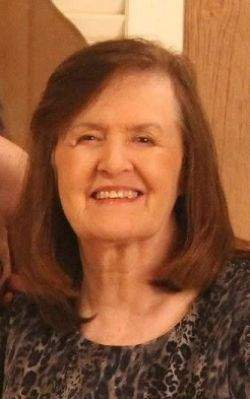 
Deanna Rae Schwab Wilde went home to be with her Heavenly Father in the arms of her loving husband Wednesday, September 25, 2019, at the age of 77.

Deanna was a graduate of Levelland High School class of 1960, and she was one of the very first students to attend South Plains College.

Deanna married Lowell Allen Pool in 1961, who preceded her in death in 1968. They had two daughters, DeeLaine Pool Ruiz of Levelland and Deanene Pool Hofacket (Dwayne) of Lubbock.

She married Robert Travis in 1970, and had one son, Tyler Travis of New Braunfels. Robert also preceded her in death.

In their 33 years of marriage, their blended family also included Arthur's children, Daphne (Tod) Delay of Seminole and Dane (Allie) Edwards of Bastrop.

She was best known as ''Nana'' and was blessed with 12 grandchildren: Schanel (Stetson) Williams of Seattle, Washington, Adrienne (Tylor) Brown of Levelland, Heather Hofacket of Lubbock, AmieLee Herrera of Levelland, Allen (Marissa)Ruiz of Huntsville, Aspen and Corbin Travis, both of Lubbock, Benjamin (Tya) Delay of Lubbock, Christopher (Gabi) Delay of Seminole, Emily Delay of Tulsa; Asher Edwards of Bastrop and Chelsea (Ryan) Ely of Maine; and three great-grandchildren: Kohan, Roman and Nova.

Deanna is also survived by her brother, Ken (Sheila) Schwab of Hutto; and sister, Dixie (Mike) Fluitt of Lexington, Texas; and several nieces, nephews and cousins.

She was also preceded in death by her parents; and her father-in-law, A.T. Wilde.

Deanna had a beautiful voice and always enjoyed singing in her church choirs.

Deanna had over 50 years in the banking industry before she retired in 2008, from Wells Fargo.

She thoroughly enjoyed decorating for the Christmas season and having the entire family gather in her home for the holidays.

Funeral services will be at 10 a.m. Saturday, September 28, at the First Baptist Church of Levelland, with Pastor Tod Delay officiating.

Interment will follow in the City of Levelland Cemetery.

Visitation will be held from 5 p.m. until 7 p.m on Friday, September 27 at Krestridge Funeral Home.

In lieu of flowers, please make a donation in Deanna's name to the SONshine Choir, First Baptist Church, 401 Houston, Levelland, Texas, 79336; or to a charity of your choice.

To order memorial trees or send flowers to the family in memory of Deanna Wilde, please visit our flower store.