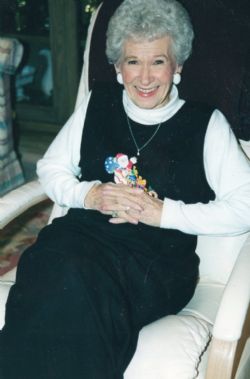 
After 94 happy years, Dorothy Stigler Green, cherished wife, mother, and Mema, passed away on October 12, 2019 with her family by her side. Dorothy's story began on September 10, 1925 in the quaint town of Thorp Spring, Texas. She was the second of three children born to Floyd and Pauline Stigler, who raised their family in the nearby town of Stephenville. Dorothy grew up loving people and loving life. She had a magnetic personality, was always surrounded by friends, and never met a stranger. She deeply valued her friendships, many of them lasting throughout her lifetime. During her school years, she was extremely active and involved. She played piano and violin, worked as a lifeguard, twirled for the school band, and held offices in many clubs and organizations. She won the hearts of her peers, who named her class favorite every year of high school. Dorothy went on to attend Tarleton College and Texas Christian University, graduating with an associate of science degree in 1945 and a bachelor of science degree in 1947. During her college years, she was introduced to the game of bridge, at which she eventually became an avid and expert player. She spent her lunch hours dancing to the big band music of her era.

Although Dorothy had worked at various jobs since her teenage years, she began her lifelong career of teaching in 1947, first in Stephenville and then in Breckenridge, Texas, where she also taught twirling to young girls on the side. In June of 1951 she married Albert Green, also a Stephenville native whom she had known since childhood. After the birth of her two daughters, she took a break from teaching, and became a dedicated mother, first and foremost. She treasured her children and embraced every moment with them. She became a school room mother, a Girl Scout leader, a church camp counselor, and a bible school teacher. She taught her daughters to swim, made their special Halloween costumes, welcomed their friends, and made their lives rich and happy. Because of her love for children, Dorothy resumed teaching when her daughters were older. She taught for 19 years in the Levelland Public Schools. She was a gifted teacher. She cared not only about her students' learning, but also about their lives and well-being. She became a member of The Classroom Teachers' Association, served as an officer in the Las Fidelis study club, and attended Christian Women's Fellowship. Dorothy retired from teaching at the birth of her grandson, who became her pride and joy. Some of the best days of her life were the ones she spent with him. During the years of her retirement she traveled extensively, leading tours for senior citizens. She never lost her passion for bridge and continued playing until quite recently. Dorothy touched countless lives and will be missed beyond words.

Arrangements are under the direction and personal care of the professionals at Krestridge Funeral Home (806) 897-1111.