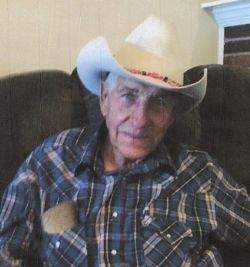 
Elvin Murl Johnson, 89, of Whiteface passed away in Lubbock on December 22, 2016. Funeral services will be held at 1:00 pm on Monday, December 26, 2016, at First Baptist Church in Whiteface. Burial will follow in the Whiteface Cemetery.

Elvin was born August 20, 1927 in Silverton, Texas to Jess and Annie (McGowan) Johnson. He grew up in Spade, Texas and Pettit, Texas. Elvin married Lottie Mae Kitchens on June 6, 1948.

After a stint in the Merchant Marines, Elvin worked at a cotton gin before moving to the Whiteface area where he began farming and running a few cows for the next 65 years. He enjoyed playing fast pitch softball, and pitched until he was nearly 60 years old.

Elvin was preceded in death by his parents, his loving wife of 65 years, brother, Barty Johnson; and sisters, Amalee Pinckard and Odell James.

To order memorial trees or send flowers to the family in memory of Elvin Johnson, please visit our flower store.