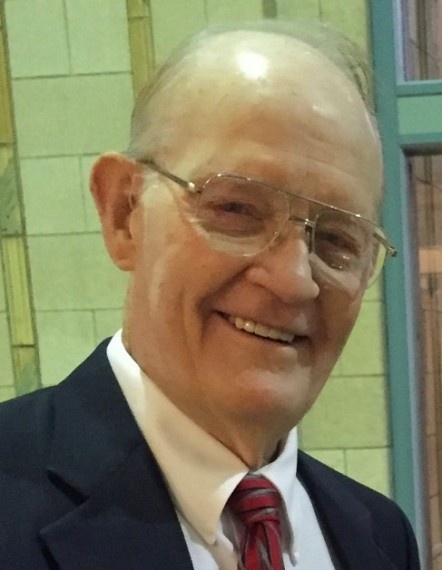 Eugene “Gene” Ethridge Nugent, age 85, went home to our Lord and Savior on Saturday, June 19, 2021 at his home in Sundown, Texas.  Services will be held at 10 a.m. on Friday, June 25, 2021 at the First Baptist Church, Levelland, Texas with Paton Parrish officiating.  Interment will follow at Sundown Cemetery under the direction of Krestridge Funeral Home.  Visitation will be from 6-8 p.m. on Thursday, June 24, 2021 at Krestridge Funeral Home, 505 Austin Street, Levelland, Texas.

Gene was born on December 21, 1935 in Joinerville, Texas.  He was raised in Sundown, Texas and graduated from Sundown High School in 1953.  He attended Midwestern State University in Wichita Falls and then recruited to Eastern New Mexico University in Portales, where he played basketball and also won the heart of his greatest treasure and the love of his life, Elnora Ann (LaRue) Nugent.  They were happily married on September 2, 1956 and have celebrated 64 wonderful years of marriage.  After college, Gene committed to serve in the U.S. Army and National Guard where he served in Fort Chaffee, Arkansas, Fort Ord, California and Fort Hood, Texas.

He was a great man of character, a great businessman with an incredible memory, an amazing musician and storyteller, and above all a devoted Christian.  During college, he bought his first piece of property in Sundown, Texas where he lived and farmed until his death; dedicating himself to building a beautiful life for his family.  Serving as a mentor to others, he taught the value of honest work done to the best of your ability and perseverance through adversity with a positive attitude, all while having fun.  He accomplished this with that great fun-filled, mischievous spirit which brought a smile to all he knew.   He never met a stranger and was full of wonderful stories.  He believed in serving others and was the epitome of kindness, gentleness and generosity, fulfilling a lifetime of dedicated service to the First United Methodist Church in Sundown, Texas and later to the First Baptist Church in Levelland, Texas, as a leader, music director, Sunday school teacher, and choir member in the infamous SONShine Choir and Men’s Ensemble, singing the National Anthem for the Houston Astros and Texas Rangers.  He served on the Sundown ISD Board of Trustees as president and was a member of the Masonic Lodge in Sundown Texas.  Of most importance, he desired to be “an eager disciple of God’s wonderful plan on earth”, according to a song he penned many years ago.

Teaching himself to play the guitar and harmonica by ear during his early childhood, he provided years of beautiful music and on any given day would break out his guitar playing any song requested, and spent years at the church with his grandchildren singing specials and solos.  Many times, he simultaneously played the guitar and harmonica.  His loved ones enjoyed years of his playing and singing at gatherings and were blessed with his last acapella performance of “One Day At A Time” in the hospital with a Christ-like purity.  Indeed, he made the world a better place and left a legacy of selfless love, tireless service and benevolent generosity and served as one of the greatest disciples of our Lord and Savior.  Job well done, kind and gentle servant.  He was our hero.

Pallbearers will be his grandsons and grandsons-in-laws.

If desired, memorials be made to the American Cancer Society Hope Lodge of Lubbock (806) 745-0700 or to the SONshine Choir Fund, First Baptist Church, 401 Houston Street, Levelland, Texas 79336.

To order memorial trees or send flowers to the family in memory of Eugene Nugent, please visit our flower store.