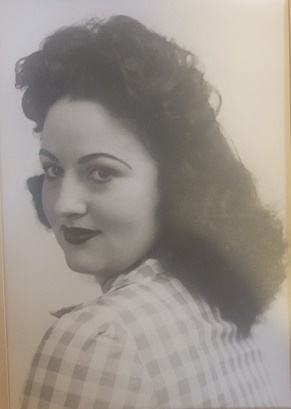 The family of Hazel Margaret Spence will celebrate her life of 99 years at 11:00 am on Tuesday, April 19, 2022, at Brownfield Cemetery.

On March 27, 1922, Hazel Margaret Grissom was born to James Lee Grissom and Naomi Lea Luther Grissom in Ferris, Texas.  She left this earth to be with the Lord on Saturday, February 20, 2022.  She was where she always wanted to pass at Spence corner with loved ones.

Hazel was a longtime resident of Levelland.  She had lived through the Great Depression.  Hazel had many stories of growing up on a homestead in New Mexico.  She married Merle Lee Spence, Sr. in 1946.

She was a world class seamstress her entire life.  Hazel worked as a seamstress for Lilly Rubens in Lubbock as well as Palmer’s and Nelson’s Dry Cleaners in Levelland.  She had several opportunities to go to work in Hollywood doing alterations for celebrities, but chose to stay at home here in Levelland.  Hazel loved to crochet blankets and was a true master of the craft.  She could make any type of clothing for any type of occasion.

Hazel took great pride in her appearance and was dressed to the nines at all times.  She always said her appearance was a reflection of her work.  Hazel believed in helping others look as good as they possibly could.  She worked out of her house for many years doing alterations for so many residents of Levelland.

She was super proud of her two sons.  She bragged about each one to anyone that would listen and even louder to anyone who didn’t want to hear it. She thought the world of her boys and had every right to be a proud mother.

Anyone who knew Hazel knew she was quite a character.  She was definitely a classy lady who had no problem letting you know what was on her mind.  She was full of jokes and 99 years of stories.

She was not only Grandma Hazel to me, but a true friend over the years.  No one could keep a secret like Hazel.  I know she took plenty of mine to the grave with her.  I loved her and Dad so much and feel so lost without them.

We would like to give a very special thank you to each and every person that helped brighten her day by stopping by to check on her and Dad.  It meant so much to her to have people that cared for her.  A list off of the top of my head is Peggy Spence, Crystal Riggins, Wendy Pierce, Jolene Bolden, Fran Castillo, Rona Wheeler-Romo, and Jimmy and Judy Nunn, just to name a few.  I would like to personally thank each of you for being there and making her feel special because she was.  There will never be another Hazel Margaret Spence.  Rest in peace Grandma Hazel until we meet again.

To order memorial trees or send flowers to the family in memory of Hazel Margaret Spence, please visit our flower store.