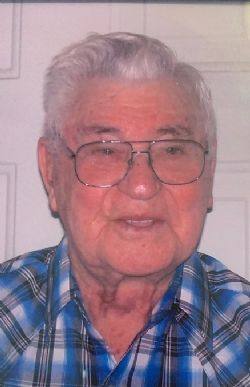 At age 17, his mother signed so he could join the military to fight for our country in the US Navy during WWII as Seaman First Class. Huston docked seaplanes at Quadulin Island, and then was a gunner aboard the USS Lexington. After the war ended, he hitchhiked to Whiteface, Texas where his mother and step-father, Dan Strawn, had moved.

On December 14, 1947, Huston married Wilma ''Bill'' Bryant in a double wedding ceremony with his sister and soon to be brother-in-law at the family farm in Pettit. Wilma passed away in December, 1993. Huston met Lora Mae West at Sam's Club in Lubbock and they were married on March 21, 1998 at the Muleshoe Nazarene Church.

In his early years following WWII, Huston farmed at Pettit. He worked in the oilfield as a roustabout and a pumper. He retired March 31, 1987 from the Texas Highway Department.

In lieu of flowers, the family suggests memorials to Ridgecrest Baptist Church in Levelland, or a church or charity of your choice.

To order memorial trees or send flowers to the family in memory of Huston Hunnicutt, please visit our flower store.