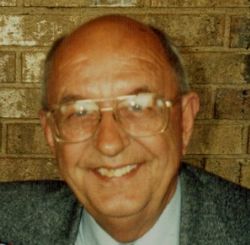 Jim was born June 19, 1930 to Dee and Alvina Ruth (Ely) Hogue in Borger, Texas. Jim graduated from Sundown High School and later attended Texas Tech University. After college he lived several years in Durango, Colorado before returning to live most of his life in Sundown. Jim served a term as president of the South Plains College Archeological Society and several successful years working with the Hockley County Historical Commission. Jim's passion was studying the life of the American Plains Indians and had a vast collection of Indian artifacts he collected over the years. After many years with Amoco Oil Company, he retired in 1986. Jim spent his retirement years traveling the world with his wife, Bettie. They spent the last five years enjoying their lives at Raider Ranch in Lubbock.

Jim is preceded in death by his parents Dee and Alvina Hogue; first wife, Charlene Hogue; and brother, Dave Hogue.

In lieu of flowers, the family suggests memorials be made to the Hockley County Historical Commission.

To order memorial trees or send flowers to the family in memory of James Hogue, please visit our flower store.
Send a Sympathy Card