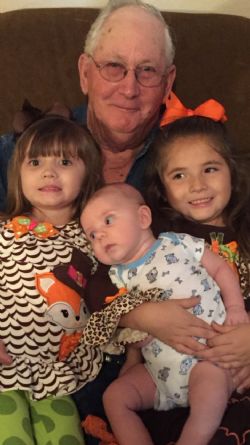 
Joe Frank Roberts, 79, of Whiteface passed from this life on January 18, 2018 in Lubbock. Visitation will be held from 3:00 to 5:00 pm on Sunday, January 21, 2018, at Krestridge Funeral Home. Funeral services will be held at 2:00 pm on Monday, January 22, 2018, in the Krestridge Funeral Home Chapel. Interment will follow in the City of Levelland Cemetery.

He served on the Long S Gin Board and was a Cochran County stock show buyer for numerous years. Joe farmed with his son and grandson.

He was preceded in death by his parents, Dora and Clarence Roberts; brothers, Clarence and Buster Roberts; and sister, Sallie Graves.

Left to cherish his memory is his wife of 56 years and 11 months, Lettie Roberts; son, Billy Joe Roberts and wife Sandy of Whiteface; daughter, Shirley Sears and husband Bryant of Whiteface; sisters, Ann Winegar of Lubbock and Frances Wiley of Levelland; grandchildren, Jana and Fernando Sanchez of Sanderson, Texas, Ashley and Scott Lawson of Lubbock, David Sears of Stephenville, Joe Houston Roberts of Whiteface, and Shonda Sears of Stephenville; great grandchildren, Bella and Adaly Sanchez and Michael Lawson; and many nieces, nephews, and friends.

Arrangements under the direction and personal supervision of Krestridge Funeral Home. (806) 897-1111