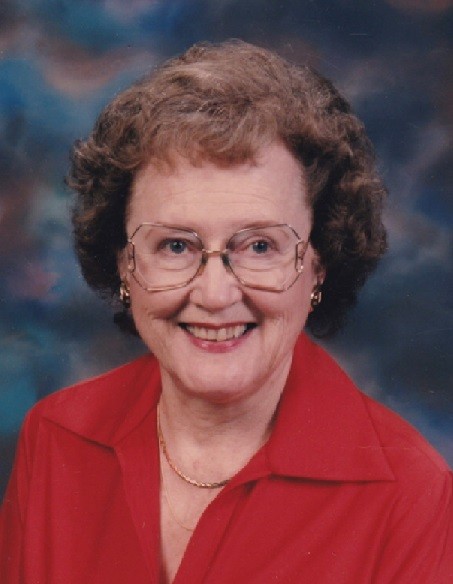 Joy Nadine Van Doren Wheeler passed from this life on January 6, 2021.  Graveside services will be held at 2:00 pm on Saturday, January 9, 2021, at the City of Levelland Cemetery.

Joy was born in Mountain View, Oklahoma on March 17, 1926, the third daughter to Art and Clara Van Doren (married April 12, 1917).  Of her three sisters, Mildred Harguess and Sylvia Simon precede her in death.  She is survived by her younger sister, Carol McRee.

She began life as an Okie.  Her grandfather, Charlie Lorenzo Van Doren, joined the 1893 Cherokee Land Rush on horseback.  He secured a farm for his family near Enid, Oklahoma.  In 1936, Joy’s family moved to Texas, acquiring a parcel of land from the former XIT Ranch.  One can only imagine the challenges of raising four girls in a dugout without electricity and running water.

They were southwest of Pep where Joy and her sisters attended school.  In addition to being a good student, Joy was a good tennis player.  She advanced to compete in regionals at Texas Tech and, for the first time, she experienced concrete courts.  That threw her game off as she was accustomed to dirt courts back at Pep High School.

Growing up on dryland farm, Joy and her sisters worked hard and grew confident in their abilities.  You would never find four stronger women than these Van Doren girls.  Each worked in the fields removing tons of rocks, chopping and picking cotton, tending to livestock, just to name a few chores.  Joy and her sisters were not city girls!

After leaving the Van Doren farm, Joy attended business school in Plainview.  In the early 50s, she worked as a bank teller and as a telephone operator.  Those were the early days of West Texas telephones.  Years later, it was amusing to watch her on long distance calls speaking three times louder than necessary.  One could just see her as an operator pulling out those phone plugs and jamming them into their proper sockets!

Joy married George on January 23, 1953.  She was a good match as the wife of a cotton farmer.  Together, they weathered sandstorms as well as the fickle agricultural economy.  They settled northwest of Pettit, Texas, in a small house that served as headquarters for not only the farming operation but for the horses, cows, pigs, chickens, goats, pigeons, rabbits, dogs, cats and whatever else they could feed. Frugality and scrimping were the order of the day for this generation and Joy and George were true disciples.  Even so, the couple let a good life raising their three boys and providing them with all the advantages of farm life.  The sons embraced the values and responsibilities Joy and George had learned under everyday Texas rural life conditions.  Case in point, we saw her chop off the head of a coiled rattlesnake threatening her family.

Joy mastered the roles expected as a wife and mother in those times as well as working the farm.  We are amazed that she prepared 3 meals a day without fail (except for Sunday night when the boys gave her the night off and made popcorn). Feeding 4 farm hands, 3 of them growing boys, was quite a challenge (eating contests!) but there was always more than enough.

Joy was ever vigilant when it came to her boys’ education.  She was an excellent student in her day and strongly encouraged music lessons, penmanship, spelling bees, proper thank-you notes, respect for our elders, and countless other proper manners.  We didn’t pass with flying colors on all of this, but we knew she was serious about it.

In 1963, Joy and George moved to Levelland into a house they designed themselves.  Many evenings had been spent at the dinner table sketching, measuring, and making sure it would serve their family for years to come.  Joy’s favorite color was pink.  She wanted her bath and kitchen (and even the exterior brick) to be pink.  She got her way.  One of their happiest times was their move into this dream home.  It was closer to schools more suited to their hopes for three boys.  At their housewarming party in May, hilarity broke out when they lit the new fireplace.  It was spring and the house got too hot; so, they turned on their new central air!

Being in town gave Joy the freedom to explore her artistic talents.  She loved needlework, knitting and especially, she loved to paint.  She painted figurines, portraits, landscapes, and china.  Each of us have received many treasures she created.  Another passion was genealogy.  She spent several years painstakingly researching the Wheeler family tree.  This was before the internet and she wrote many letters and then waited for available documents.  She and Dad traveled many miles visiting courthouses and meeting distant, new found relatives.

Her boys especially value that she and Dad knew when to let go and let us grow into young men. We all had big decisions to make concerning our lives and she did not impose nor push.  We learned to make those decisions and knew we had her support.  As adults with their own grown children, we now know how difficult that can be! Her strength obviously impressed us, and it is no coincidence that all three of her boys married the strongest women we could find.  She was heard more than once bragging to others about her “three beautiful daughters-in-law” Lynda Eatherly (Van), Pamela Creasman (Randy), and Donna Avery (Vernon).  A huge credit goes to our father, too, as he obviously taught us how to pick em.

Thanks, Mom.  You will forever be in our hearts.

In lieu of flowers, the family suggests memorials be made to the Hockley County Meals on Wheels.

To order memorial trees or send flowers to the family in memory of Joy Wheeler, please visit our flower store.