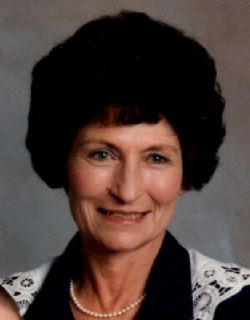 
Levetta Thetford Bradshaw, 85, of Levelland, formerly of Ropesville, passed away on Friday, April 28, 2017. Family visitation will be held from 6 - 8 PM on Wednesday, May 3, 2017, at Krestridge Funeral Home. Funeral services will be held at 2 PM on Thursday, May 4, 2017, at First Baptist Church in Ropesville. Burial will follow in the Ropes Cemetery.

Levetta was born December 23, 1931 in Shallowater, Texas to Tee and Irene (Benton) Thetford. She grew up in the Lubbock area including Shallowater and New Deal, but spent most of her days on the family farm in Ropesville.

She graduated from Ropesville High School, where she participated in basketball. She loved the game and always played hard. She was extremely competitive in everything that she did.

Levetta married Carrol Bradshaw on October 29, 1948 in Ropesville, and together they raised six boys. She spent her days doing laundry and cooking meals for seven bottomless pits, including her nephew David Thetford. Her spare time was filled with feeding pigs, hoeing cotton, spraying weeds, changing water, and running the module builder.

She was a member of the First Baptist Church of Ropesville where she taught Sunday School and Vacation Bible School for many years. Levetta loved to bowl and participated in league bowling for 50 years.

Levetta followed all sports and school activities. She refereed many ballgames, even though she never owned a striped shirt or a whistle! Levetta coached several girls' little dribblers' teams, leading one team to the National Little Dribblers' Tournament in Levelland. In her later years, Levetta traveled the world spending time in Alaska, China, Japan, England, Australia, and New Zealand. She loved to play Canasta, Bridge, and dominoes. She never did like to lose. Levetta helped with Meals on Wheels for many years. She served as the Hockley County election judge for the community of Ropesville.

Levetta had a compassionate heart and went the extra mile helping those she loved during difficult times by washing dishes, cooking meals and doing whatever was needed.

The family would like to thank the caregivers at Hickory Place and Interim Hospice for sharing their love and compassion with our Mom and Granny as she went through a very difficult time in her life.