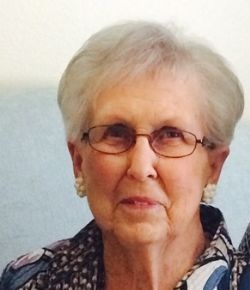 
On Friday evening, April 12, 2019, Lunette received victory over death and Alzheimer disease and joined her Lord and Savior, Jesus Christ. Her services were held at First Baptist Church in Levelland with Sammy Elliott officiating. Interment was in the City of Levelland Cemetery.

She was born to Earl and Dorothy Cook on January 3, 1932 in Quanah, Texas. Lunette and her brothers, Ray and Bruce, spent their early childhood in Kirkland, Texas. Her family later moved to Childress where she graduated from Childress High School. Lunette graduated from West Texas State College in 1953 with a Bachelors in Education. She later obtained her Masters from Texas Tech University (Go Raiders!).

Lunette married John Dickson on August 12, 1955 in Quanah. She taught in the Levelland School system, both at Levelland High School and Capitol Elementary School. She joined the SPC faculty in 1969 as an instructor in the business administration department, and was later named chairperson of that department in 1975. Lunette retired in 1993 after 24 years at SPC. Upon retirement, she was quoted as saying, ''I am looking forward to doing more traveling with John, playing golf, and spending more time with my three grandchildren'', which she was able to do for many years.

Lunette was preceded in death by her parents; husband, John; and brothers, Ray and Bruce Cook.

The family suggests memorials may be given to the Lunette Dickson Memorial Scholarship at SPC, or a charity of your choice.

Arrangements are under the direction and personal supervision of the professionals at Krestridge Funeral Home. (806) 897-1111

To order memorial trees or send flowers to the family in memory of Lunette Dickson, please visit our flower store.