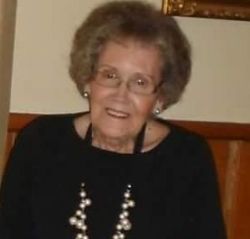 
LEVELLAND- Services for Mildred Jimison Price, who passed away on Sunday, November 6, 2016, will be held at 2 P.M., Thursday, November 10, 2016 at Krestridge Funeral Home Chapel with Pastor Chris Driver officiating. Interment will follow at the Meadow Cemetery.

She was preceded in death by her husband, Glenn Reid Price.

Mildred and Glenn married in 1945 and lived in the Lubbock area until 1954 when they began farming at Ropesville. They were married for 69 years until his death on December 29, 2014. Mildred was a homemaker for many years. She was active in the First Baptist Church of Ropesville as the Children's Choir Director and with VBS. In 1965, Mildred began working at the ASCS office in Levelland until 1975.

She loved her family dearly and nothing thrilled her more than having each of them by her side. She will be missed by her family and her memory will be cherished by each of them.

Arrangements are under the direction and personal care of the professionals at Krestridge Funeral Home, (806)897-1111