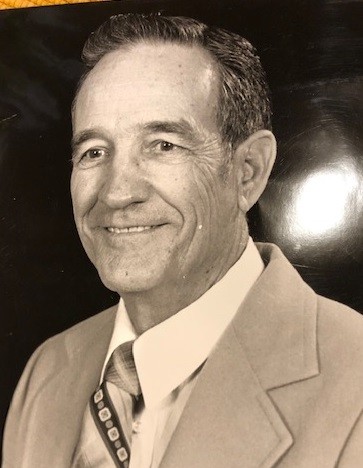 Nathan Tubb was born on May 8, 1918 in Lynn County (New Home) Texas.  He moved to Levelland, Texas in 1921 with his parents, Howard & Lizzie Tubb, two brothers, Gano & Francis, and one sister, Clarkie.  His family moved to Levelland along with the Bowers family in 1921.  They were the first 2 families to settle in Levelland.  His two other brothers, Harvey & Floyd, were later born in Levelland.

Nathan attended school in Levelland and graduated from Levelland High School in 1937.  He attended Southwestern State University in Weatherford, Oklahoma, where he received a Bachelor’s Degree.  He met and married the love of his life, Freda Lee England, in 1940 while attending Southwestern.

Upon returning to Levelland, Nathan taught school for a semester and also kept the original books for the Hockley County Auditor, Warren Pearcy.  Nathan & Freda were also employed as teachers in Pep, Texas.

In 1945, Nathan was drafted into the U.S. Army spending most of his time in New England typing orders for soldiers.  When he returned home in 1946, he was hired at Whiteface, Texas as a coach, teacher, principal, and then superintendent.  He received his master’s degree from Texas Tech while in Whiteface. Nathan & Freda made many lifelong friends and had fond memories while in Pep, Whiteface and Levelland.

In 1975, through Nathan’s vision, SPC launched an associate’s degree in country music (later known as the Creative Arts Department).  He also made a trip to the “Grand Ole Opry” hosted by Tom T. Hall.  In 1981, Nathan retired as Academic Vice President culminating a 41-year career in public education.

He was in the SPC Athletic Hall of Fame and served on the Board of Regents from 1988-1996.  In 1986, Nathan was named the first Silver Haired Legislator in West Texas.  He was also chosen as one of the top 10 Texans recognized by the Texas Department on Aging, Southwest Airline and Texas Monthly for the “Greatest Generation of Texans”.  In 2011, SPC named a new women’s dormitory, “Tubb Hall”, in honor of Nathan (Dean Tubb) and his service commitment and support of SPC.

Nathan mentored hundreds of students over the years.  He was active in the First United Methodist Church, Kiwanis Club, Season Golfers, and Meals on Wheels.  Nathan also enjoyed meeting his “coffee shop” friends each afternoon.  He would often say that he learned more from them than he did in four years of college.

In 2004, Nathan’s wife, Freda, passed away.  He soon moved to the Hickory Place where he continued to love life and people and make the best of his situation.  He always had a smile on his face and a witty sense of humor to share with his family and friends.  His greatest joy was to see his kids, grandkids and great grandkids walk in the door to see him as he welcomed them with a big smile and hugs.

Nathan loved his caregivers and staff at the Hickory Place along with the other residents and loved to make everyone laugh!  Many times throughout the years, people would ask him his secret to living a long life.  He would quickly say, “If I knew for sure, that would answer the million-dollar question, however, I’ve always tried to eat right, exercise and accept what life brings each day!”….and that he did!  He was a Christian man with high morals and family values which he graciously instilled in those he came in contact with his entire life. In May, 2018, his children honored him with a 100 th birthday party at South Plains College. It was designated the “Party of the Century”. Over 400 of his family members, friends, former colleagues and students attended. It was very evident that he was well respected and loved by many people. The party ended with Nathan singing “Goodnight Irene” which brought much laughter and applause. It was a wonderful celebration of Nathan Tubb’s life!

He was a hero to our family and truly a great example to follow. We will miss him so much, but his legacy lives on.

Nathan was preceded in death by his parents, his wife, Freda, and five siblings. He is survived by a son, Terry Tubb and wife Nancy of Midland, Texas; a daughter, Libby Thetford and husband Billy of Levelland, Texas; a son, Jerry Tubb and wife Diane of Austin, Texas. Nathan had 4 grandchildren, Darren Waters and wife Tammie of Midland, Texas; Derek Waters and wife Morgan of Lubbock, Texas; Jennifer Hoff and husband Jason of Alexandria, Minnesota; Niccole Crank of Austin, Texas. He had 8 great grandchildren, Courtney Sullivan, Bryce Waters, Hannah Hoff, Gage and Berkley Waters, Logan, Dylan and Ethan Crank. His first great, great grandchild, Jaxon Sullivan is to be born in June.

To order memorial trees or send flowers to the family in memory of Nathan Tubb, please visit our flower store.
Send a Sympathy Card