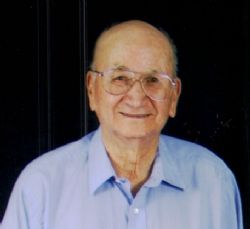 
Orvil Janes Creelman, 95, of Levelland passed away on Friday, December 16, 2016 in Levelland. Funeral services will be held at 10 AM on Monday, December 19, 2016, at Fifth Street Baptist Church with burial to follow in the City of Levelland Cemetery.

Orvil was born November 6, 1921 in Dalton City, Oklahoma to parents William Thomas and Lydia Ethel (Litchford) Creelman. He enlisted in the Army Air Corp in 1941 and served as an aircraft mechanic for the duration of the war, plus two months. Orvil worked in the oilfield, retiring as Field Foreman for Texaco. He was a pilot and pilot instructor for many years in his spare time. Orvil also served as a Deacon at Fifth Street Baptist Church.

He is preceded in death by his parents, his wife of 63 years Eva May Harvey Creelman; half-brother R.L. Wilson, brother G.W. Creelman, and sisters Thelma Davis and Wanda Childress.