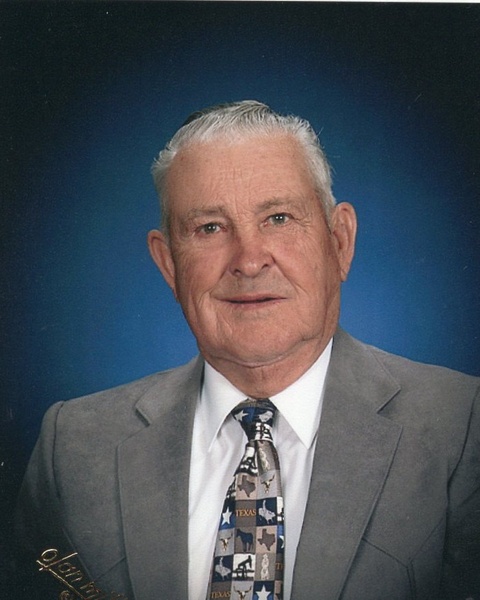 Raymond Eugene (R.E.) Bullin, 93, passed away peacefully at home on Friday, October 7, 2022. Funeral services will be Thursday, October 13, 2022 at 1:00 p.m. at First Baptist Church in Levelland, Texas with Steve Wright and Arlano Funderburk officiating. Viewing will be from noon until service time at the church. Interment will follow at the City of Levelland Cemetery.

R.E. was born on June 23, 1929 to Harvey and Grace Bullin in Turkey, Texas. He grew up on the family farm in Turkey and attended school in Turkey before going to work as a truck driver for a local farmer. He then went on to help his dad farm wheat in Arnett, Texas. R.E. met Naomi Marcy in 1947 on a blind date that was set up by mutual friends. Shortly after their first date, R.E. unexpectedly showed up to Naomi’s dorm at Texas Tech to ask her on a second date. Upon his arrival, he discovered another gentleman was also there to take Naomi on a planned date. Before Naomi could make it to the dorm lobby, R.E. took it upon himself to falsely inform the other gentleman that he and Naomi were engaged. Surprised and shocked, the other gentleman left, and R.E. proceeded to convince Naomi that her original date had not shown, but since he was there they might as well go get a coke. A few days later when Naomi learned of R.E.'s little fib, she confronted him about it but ultimately laughed it off. A few short months later, R.E.’s little lie became true when they became engaged. They were married on September 11, 1948 in Naomi’s parents backyard in Ropesville, Texas.

As newlyweds, they moved to Levelland and purchased their first home with the money R.E. made from his first crop. They became members of First Baptist Church and R.E. remained a member until his death. He was a man of God and led his family to love and trust God above all else. Shortly after buying their first home, R.E. began running a backhoe for a local sand and gravel company before opening his own sand and gravel yard which he ran for many years. In 1950, they gave birth to their first child, Rodger.

In 1954, they returned to the family farm in Arnett where R.E. continued farming and Naomi worked at the gin as a bookkeeper. While farming, R.E. started his own cottonseed hauling business which he ran with Naomi’s help. In 1955, they welcomed their second child, Raoma. They stayed in Arnett for ten years before building their dream home and moving back to Levelland in 1964. R.E. continued farming until the early 80’s when he began investing in oil production with Kirby Rogers. He then went to work for Wheeler Oil leasing land for drilling. From there, he opened his own oil operating service, R.E. Bullin Operating, which is still running today.

R.E. was the perfect example of “work hard, play hard.” He obtained his pilot's license in 1955 and enjoyed flying for twenty years. He and Naomi enjoyed many traveling adventures together including multiple cruises and camping trips with friends, but their best memories were made during the many summers they spent at their cabin in Ruidoso. While there, they enjoyed cheering on their race horses, attending church at the race track, and spending countless hours drinking coffee on the deck while watching the deer and hummingbirds.

While many people knew him as R.E., he was affectionately known as “Bapa” to his grandchildren and great-grandchildren. They will always remember him as a funny, care-free, playful and tender grandfather. He loved to make his grandkids laugh with his “Bapa jokes” and witty one-liners. It was not unusual for him to get down on the floor with his grandkids and engage in hours of play and laughter. His family was truly the joy of his life and he was happiest when they were all together.

The family would like to extend a special thanks to Interim Hospice as well as R.E.’s in-home caregivers for the wonderful, compassionate care he received.

To order memorial trees or send flowers to the family in memory of R. E. Bullin, please visit our flower store.