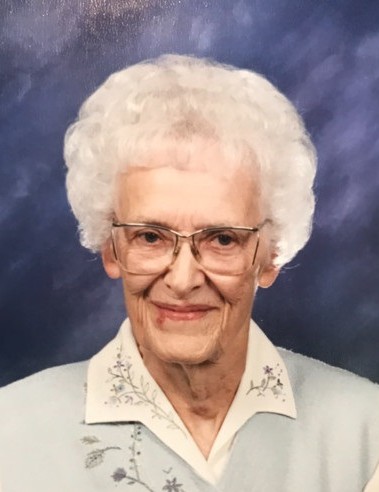 Theda A. Smith passed away on Tuesday, May 19, 2020 after a short illness. She was born Theda Allene Witwer on October 6, 1920 in Nowata County, Oklahoma to Roy and Opal Witwer. Theda was raised on a wheat farm in Nowata County, Oklahoma; where she attended school, and graduated Salutatorian of her class. She then continued her education at a college in Coffeeville, Kansas where she received her teaching certificate. She taught school for one year in Coffeeville prior to her marriage to Glen Olen Smith on June 15, 1941, only a few months before the United States entered World War II.

Glenn began work for Stanolind Oil, and in January 1943 the couple were blessed with twin boys, Garey and Barry. Glenn was drafted into the Army in August of 1944 and Theda, pregnant with their third child, returned with her twins to her parents’ farm. In October, 1944, she gave birth to daughter Elaine. Glenn served in the Philippines and Japan and was honorably discharged as a Staff Sergeant in December 1945.

After returning home, Glenn resumed working for Stanolind.   After years of transfers to many different locations in eight different states, Glenn and Theda were blessed with another son, Neil, in July of 1953. Two years later Theda and her family settled in Levelland, Texas. In 1966, Theda’s husband Glenn passed away due to a heart attack. Theda returned to school and earned her BA from Texas Tech. She began teaching school for LISD in 1970. She taught at Cactus Elementary and Middle School while raising Neil. She retired after 15 years at the age 65. Theda’s last 12 years were spent with the help of the wonderful caregivers at Hickory Place in Levelland.

Funeral services will be held on May 22, 2020 in the First Baptist Church.  Interment will follow in the City of Levelland Cemetery.

To order memorial trees or send flowers to the family in memory of Theda Smith, please visit our flower store.