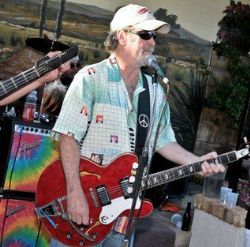 
William Ernest Falkinburg, 64, of Lubbock, TX passed from this life on September 13, 2017 at a hospital in Lubbock. A Memorial Service will be held at 2PM on Saturday September 23, 2017 at Krestridge Funeral Home. 505 Austin Street Levelland, TX.

Bill was born March 1, 1953 in Graham, TX to Robert and Mazie (Wadley) Falkinburg. Bill spent much of his time giving back to his community as a volunteer after serving his profession of 20 plus years at Lubbock Power & Light. His greatest joys in life were camping in the Colorado Rocky Mountains, playing music and spending time with his family.

He is preceded in death by his parents and sister, Linda Kay.

Those left to honor and cherish his memory include daughters, Kimber Lee Falkinburg, Erica Betts and husband Jim, and Ashley Stallings.

In lieu of floral contributions, the family requests that memorials be made in Bill's name to the Covenant Foundation, 1447 North Harrison Saginaw, MI 48602.

Arrangements are under the direction and personal care of the professionals at Krestridge Funeral Home. (806) 897-111